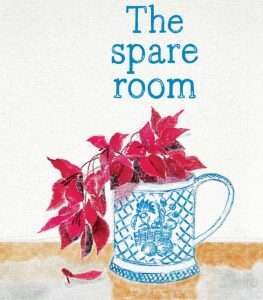 The author (Helen) had her fifteen-year friend Nicola from Sydney staying in her spare room in Melbourne for three weeks. Nicola was there for a Vitamin C Treatment claiming to cure her cancer, while Helen had to care for her.

Nicola had never been married and had no children. She was what called Bohemian.

She was obsessed with alternative treatments and theories, even they all seemed to be deceptive to Helen. The side effects of the treatment gave Nicola a lot of bad nights but she made herself believed that it was the proof of the cancer being reduced, while at the same time, Helen had to spend all those sleepless nights taking care of Nicola and holding back to not hurt Nicola by pointing out the truth of the false treatment.

The days went on until Helen could no longer stand and confronted Nicola. Helen pushed her to face the truth: She was going to die.

A friend introduced this book, and by the first several pages of reading, I felt quite heavy about the topic. Elderly people and cancer, it reminds me of my grandma, except she does not have cancer but AD (Alzheimer disease).

I saw my grandma sometimes suffering from physical pain from her old body even though she is perplexed most of the time, but no one knows how exactly she feels. I also saw the workload of caring for her from my mom, aunts, and uncles, lucky she has a big family, many kids.

Things will be very different when it goes my turn. To take care of my parents, I am not sure how much help I can get, and the worst case I might be the only one. To myself, not to mention if there will still be anyone around, the thought of troubling anyone to involve so much physical labor has already put me in agony.

My rescue, the solution I end up thinking about, might be to terminate the pain on my own will, which pragmatically is Euthanasia.

I read a sad story last year about an Australian elderly woman secretly poisoning herself to end her life without telling her family because the law would have against them if they had been aware of that and had assisted her to suicide. The daughter did not even get a chance to say goodbye.

Good news is Euthanasia is going to be legal from the middle of 2019. (Euthanasia: Victoria becomes the first Australian state to legalize voluntary assisted dying )

For Nicola in the book, the one thing that made her not giving up was her remorse for not making good use of her life. She said in the book:

I’ve wasted my life. Look at me. I’m sixty-five. What have I got to show for it?

I’ve had amazing good fortune. Born with reasonable good looks. A family with money. A few talents. But I threw it all away. I made nothing of myself. I was sloppy. I never stuck at anything. I failed and just kept moving. I wasted my good luck. I pissed it up againt the wall. It’s no wonder I’ve run out of it now.

Her remorse became my fear when I read those words.

I felt up and down through my short life worrying about what I will become and achieve at the end. The society we live in is never lack of rules to follow, but for me, it is always difficult to find out which rules I should follow. Then Helen’s dispute about it later in the book lightened my somehow:

You think your life’s been wasted, then why do people love you?

You don’t suppose it could be because of your character? Or your bottomless generosity? The way everything you touch becomes beautiful?

Overroll, it’s a good book to read and gave me a chance to think about the situations when my time comes (still too early though).

Helen Garner, was born in 1942 in Geelong, Victoria, is an Australian novelist, short-story writer, screenwriter, and journalist. She is known for incorporating and adapting her personal experiences in her fiction.

The Spare Room is based on the illness and death of Garner’s friend Jenya Osborne.

I will read more books about this author: